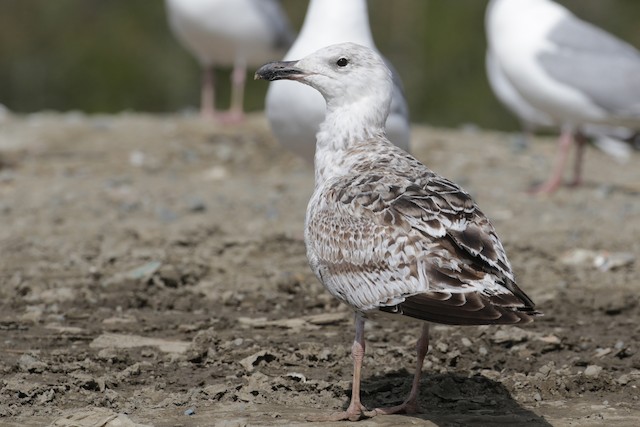 Cameron's notes; I was at the dump to count Rusty Blackbirds and check the gulls -- according to permission I have to do those counts. I counted the blackbirds and then waited for all large machinery to vacate the area. At the gull site, the first bird I laid eyes on was an immature (2cy) Great Black-backed Gull, as it utterly dominated a group of Herring Gulls. Great Black-backed is a gull I've searched for and dreamed of seeing since the day I moved to the Yukon. It was a Great Black-backed Gull found by Rich MacIntosh at Kodiak, Alaska in February 1995 that made seeing one in the Yukon actually seem possible. Then in April 2016, Jukka Jantunen had a tantalizing observation of a probable GBBG at M'Clintock Bay. Now today, this large impressive gull stood just a few metres away, with ample opportunity for close study and photos. It dominated the Herring Gulls in size, being clearly larger, standing taller over the heads of Herring Gulls, with thicker legs, and a massive heavy bill. At one point, I watched the Great Black-backed grab a Herring Gull by the neck and pin it to the ground in a one-sided battle over a scrap of food. Then the Great Black-backed smashed a Herring Gull for a cookie, and it was all the Herring Gulls could do but stand around in a retinue and watch the New Queen of the Dump enjoy her snack. And why a Queen and not a King? The head shape was angular and blocky when viewed from a variety of angles, but less so than I would expect than if it was a male. I had a very good view of the mostly white rump, and mostly white tail with black sub-terminal barring forming a band - I also got good photos of this feature. The GBBG called quite a few times - a deep resonant single-note long-call tossing its bill down and then to the sky, especially when it had just thrashed a Herring Gull. The thick hefty bill was mostly black with a pinkish base to lower mandible, and at some angles and light I could see that the upper mandible was becoming pink towards the base; the very tip of the upper mandible was whitish. The thick legs were dull flesh in colour, with a bluish-flesh cast on the tibia. The overall impression of plumage was of a pale headed gull, with pale whitish underparts with scattered dark brown spots at the sides of the breast and undertail, and an overall dark back with a checkered black/white pattern on the mantle and scapulars. Tertrials were medium-to-dark centred brown with a broad pale edge. The wing tips were a dark blackish-brown through the primaries and dark brown secondaries with a white trailing edge. It had newly moulted P9 & P10 (counting in from outer primary) and these feathers were a solid dark grey with whitish tips. The greater covert were quite pale whitish-patterned grey with slightly darker brownish base which showed as a band across the folded wing. The photos show many finer plumage details. What a cool gull - a long-held dream realized.