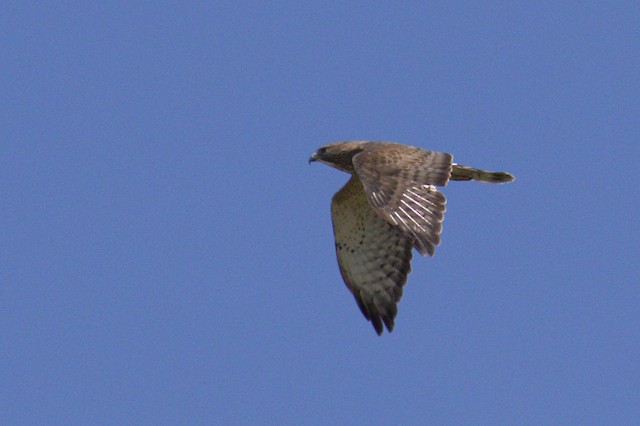 I spotted this bird from the extension of 2nd Avenue just west of the river when it circled over the woodlot to the northeast of our position, from which it flew low overhead to the west before circling over the road for a minute or so before it set its wings and glided to the southwest over the woodlot to the southwest of our position. I took several photos when this bird flew by, but I also studied this bird through my scope when it was circling. This bird never called. This bird was immediately recognizable as a small Buteo, but my first impulse was to get photos thinking that it was the Gray Hawk. It was only when I studied it more carefully that I noted that this was not the same bird given a variety of differences. Clearly evident, even upon a brief look, was that this bird was smaller than a Red-tailed or even a Swainson’s Hawk, and it had a distinctive shape to the wings that combined broad bases and bulging secondaries with a taper toward the outer part of the wing, which was broadly pointed. The head extended only a short distance in front of the wings and the medium-length tail protruded behind. I also noted that the tail was spread when I first spotted this bird, when it had a broadly rounded tip. I further noted only a short bill, but I never clearly saw the legs or feet. The plumage was superficially like that of a Gray Hawk, in that the underparts were pale, the underwings rather whitish albeit with a conspicuous black frame, and the tail was mostly blackish with several well-defined, white bands. Closer inspection when this bird flew overhead was that the head and neck were more brownish, which resulted in a somewhat hooded appearance but also in a relatively narrowly whitish throat. Moreover, the barring below was darker, more conspicuous, and coarser on the belly and flanks than that of a Gray Hawk. I was also unsure if the breast and sides were barred or instead more solidly marked, even though I did not think this bird had an obvious breast-band like a Swainson’s Hawk. The underwings were mostly whitish to cream-colored, but with a black frame that was relatively narrow but also well-defined as it extended across the tips of the primaries and then inward along the trailing edge of the secondaries. I cannot now remember if I saw the underside of the tail clearly, but what I can remember about the tail was that it was blackish, if not truly black, and with at least two white bands that were relatively narrow but also well-defined. My views of the upperparts and uppersides of the wings were relatively brief as this bird circled overhead, but what I did note was that the back and upperwings were dark brown and not gray, and that they were not boldly marked. What I cannot now recall is if my views of the tail were of the upperside or the underside, but my impression was that my best views were from below. I cannot now remember any of the soft-part colors, but I suspect they will be evident in my photos.