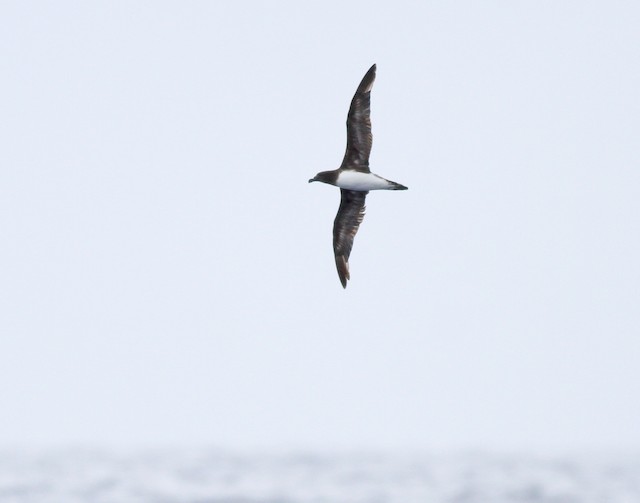 Around 1140 Peter Flood alerted us to a different petrel flying up the slick toward the boat from astern. He thought it might be a light morph Trindade Petrel, but as it came in close, we realized it was not. It was a bit too large and the underwings were dark. Our next thought was Atlantic Petrel, but it didn’t really look right for that. The bird in question was sailing around with straight wings and that did not look right for a Pterodroma. Several of us snapped some pics before the bird glided away. Looking at my camera, I started to think “Tahiti Petrel?” Kate Sutherland came to the wheelhouse with the same thought. It was a species we had not seen before in life, but we had a search image from pics and video. But it was in the WRONG OCEAN, so it was not on our radar initially. As far as I know, this is the first occurrence in the Western North Atlantic and perhaps the Atlantic period. After looking over the pics, everything seemed to be in order for Tahiti Petrel. We’ve seen some out of range birds from the boat over the years, but I have to say this one is the least expected of them all! I wish it had stuck around a little longer, but it was awesome to be able to see it here. (by Brian Patteson)