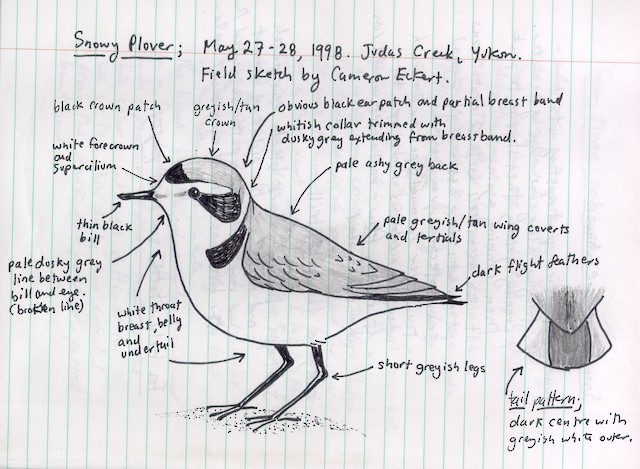 This Yukon's first Snowy Plover, first spotted by Cameron Eckert and Pam Sinclair, and then seen by many on a Yukon Bird Club field trip. Cameron's field notes "Snowy Plover, May 27-28, 1998 at Judas Creek, Yukon. Very small plover - obviously smaller than Sanderling or Semipalmated Plover. Perhaps as small as Semipalmated Sandpiper. Shape quite horizontal in posture. Wings just slightly shorter than tail at rest. Legys greyish in colour with just a hint of greenish and flesh tones: Legs short, probably not taller than Semipalmated Sandpiper. Bill black and very thin; not longer than the distance between the base of the bill and the back of the eye. Eye black. Throat, breast, belly, sides, and undertail all white. Back ashy-grey - very pale with some pale tan feathers. Tertials and wing coverts pale greyish tan. Flight feathers blackish with thin white horizontal wing line seen in flight; not as bold as Sanderling's wing line. Tail centre with dark greyish/black centre and greyish white outer tail feathers; some darker greyish feathers extending from centre of tail into rump area. Face white with black patch behind eye extending to the black of face. Dusky broken line, very faint between eye and bill. Forecrown and supercilium white - appearing as a white band around the front of the face, above the eye and ending just behind the eye. Above the white forecrown is a black patch extending to just over the eye and a little further back along the side of the crown. The rest of the crown was greyish tan - quite pale like the back. A white band continued from the face, below the dark ear patch and around the nape. It was trimmed wither on the top or bottom by a thin dark grey line - I think along the top extending from the dark ear patch. The breast band with jet black and limited to the sides of the breast only - the front of the breast being white. The black breast band may have cointinued in a thin dark grey line over the back - providing a dark trim to the white colar - it was difficult to see if this thin dusky line extended from the dark ear patch or partial breast band. Behavious: the bird spend most of its time foraging along the edge of the water. Running quickly then stopping to peck then running again. It was also associated with 2 Arctic Terns on a nest. One assumes it enjoyed some protection from the terns. The plover favoured spots on the beach where the mud was kicked up a bit. It rare flew - rather it would run when approached. Call: a low-pitched trill. Sex/age? The very dark black ear patch and marks at the sides of the breast and very black crown patch suggested that the bird was a breeding plumage male." Reference: Eckert, C.D. and P.H. Sinclair 1998. Snowy Plover touches down at Judas Creek, Yukon. Birders Journal 7(5):250-253.